There are the three main 3D Model Features for the saVRee 3D Viewer:

Here is an example model you can reference throughout this documentation:

2. Cross-Section View
a. Displays an object or group of objects in a cross-section view.

a. Switch between different variations of a 3D model.

Definitions:
Part or Component
A set or group of objects
Object
An individual 3d object or material

The first section of the naming convention is the 'name'. This is the name that would be shown within the list of parts or variations of your 3D viewer interface.

The second section of the naming convention are the 'options'. These include the show/hide parts, cross-section or variations features of your 3D model. The options include ' F' for full-view,  'C' for cross-section, and 'V' for variations.

Options are case-insensitive so you can also use lowercase 'f', 'c', or 'v'.

In between the 'name' and 'options' sections are separators, which are colons, ':' . These separate the two main sections of the part name and must be included for the part to work as intended in your 3D interface.

After the second ' : ' separator, you will often have a set of letters of numbers created by your 3D software, such as '001'. This will not show on the 3D viewer interface and acts only as a unique id for that 3D part within the software.

This feature is activated by naming a 3D part using the convention format (name:options:).

The text within the 'name' section will appear in the Show/Hide menu.

Removing 3D Parts from all menus

For example:
A 3D object named 'Ring:' would show in the 3D viewer and in the Parts list menu.

A 3D object named 'Ring' would show in the 3D viewer ONLY and NOT in the Parts list menu.

Important Note
The Show/Hide Parts checkbox must be selected within saVRee's Interface Builder to activate this feature.

These features are activated by the letters 'C' for cross-section or 'F' for full view, which are added to the options section of the part name format. 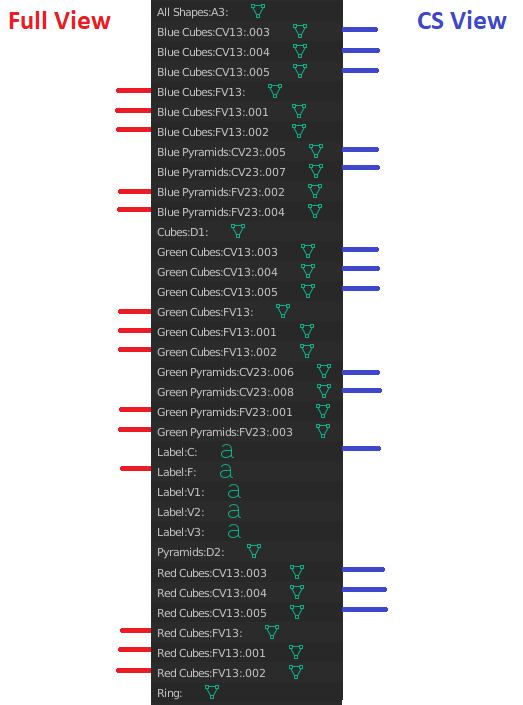 Important Note:   The Cross-Section View checkbox must be selected within saVRee's Interface Builder to activate this feature.

In the third section about model Variations, we will use a 3D model of some Cubes & Pyramids as the example. The model has three variations (previously called configurations) that we want to switch between.

It also has the Show/Hide Parts & Cross-Section View features that were covered in Sections 1 and 2.

Here are the components of each Variation:

To break this down further, the below table categorizes each part by the relevant feature:

Next, we need to communicate to the viewer the Variation which we want to be able to select.
In our Cubes & Pyramids example, this follow as:

To do that, we need to use dummy objects (aka ghost cubes or dummy cubes).

We add these three cubes in the 3D scene and give each of them a name that follow the following convention:

The letter 'D' followed by the variation number.

The viewer will automatically hide each object that has the dummy object naming style (i.e. Cubes:D1:) but are important for the the 3D Viewer to work properly.

Set the default variation when the 3D model first loads

To set a specific variation to the default when the 3D model first loads, use the letter 'A' instead of 'D' for the dummy object. For instance, in the Cubes & Pyramids example, we want 'All Shapes:D3:' to be the default on first load, so we then simply need to change the letter 'D' to 'A'.
The final object name would be 'All Shapes:A3:', as you can see in the below image which highlights the variation dummy objects.